Beginning with version 1.2 pdfChip comes with an Adobe InDesign export filter that allows users to create their templates in InDesign. InDesign is the most commonly used layout tool with many features for the creation of print content.

It is easily possible to export an InDesign file to HTML with InDesign itself, however, this export will create rather big and unstructured files with various elements that are not required if the HTML is going to be converted to PDF. In addition it lacks of support for the pdfChip specific contents, e.g. of CMYK or ICCbased colors.

The export2pdfChip export filter will:

The main purpose of the export filter is to make it possible to use the layout features of InDesign for the creation of HTML templates for pdfChip, the main purpose is not to create an as good as possible HTML rendition from any InDesign file.

Open the Scripts Utilities in Indesign

For installation in InDesign go to Window, Utilities and select Scripts. This will open the Scripts palette. 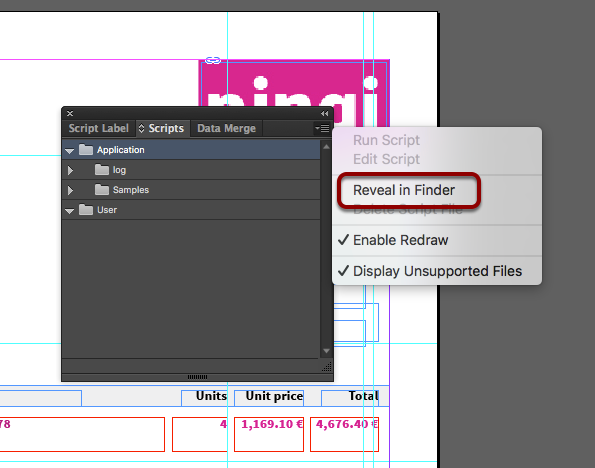 The Scripts palette shows scripts that are available for the user or for the application (all users on the computer). Pick the one that is appropriate in your case and open the options menu and select "Reveal in Finder".

Install the script by copying all content from the pdfChip program folder "additional tools/InDesign to HTML export" into the Scripts Panel folder in the Scripts folder. 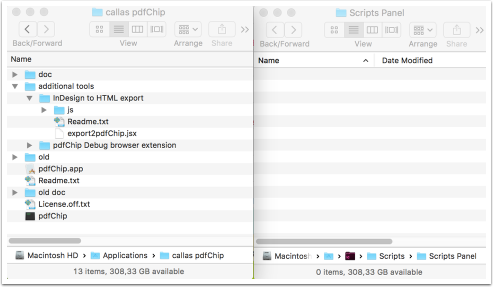 The script "export2pdfChip.jsx" is the actual export script. It can be used by double clicking it there in the Scripts palette.